Home Южная Азия Tajik President Emomali Rahmon visit to Pakistan: What Tajikistan will get from... 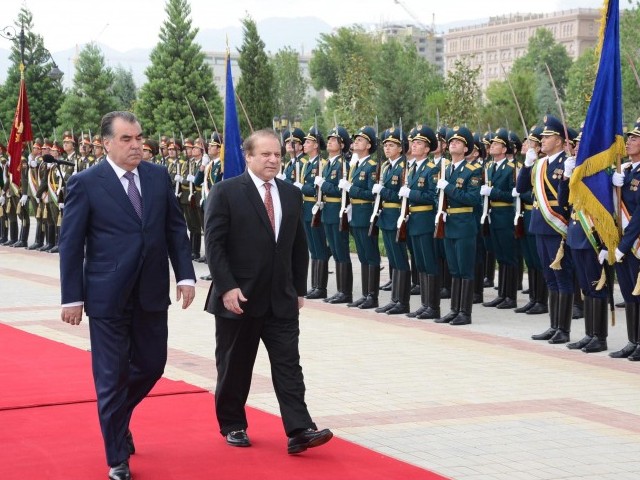 What Tajik President Emomali Rahmon  will get from his visit to Pakistan?, is the most important question in the mind of Central Asia observers. Emomoali will reach capital city of Islamabad of Pakistan on November 12 (Thursday).

His visit is in connection with invitation of Prime Minister of Pakistan Mian Nawaz Sharif who visited Dushanbe on June 9, 2015 and invited his counterpart to Islamabad.

It may be remembered that Mian Nawaz Sharif was the person who actually initiated contacts with Central Asia when these states got independence from former Soviet Union in early 90s. However, these relations were strongly damaged during the era of former dictator General Musharraf who cut all contacts with Russia and central Asia states due to reasons nobody could understand.

Mian Nawaz Sharif has already visited all central Asia states except Uzbekistan where he is going on November 17, 2015. He already visited Russia and Belarus in Eastern Europe and have invited all heads of the states of Central Asia to visit Pakistan. The visit of Tajik President Emomali Rahmon is the outcome of such invitations.

It may be remembered that Indian Prime Minister Modi visited Central Asia this year and proposed a minus Pakistan and minus Afghanistan formula to reach Central Asia in trade and travel but this formula was strongly rejected by Tajik President Emomali Rahmon during their meeting.

Tajikistan is the poorest country in Central Asia having weakest army, resource-less border security force and crumbling economy. Its proximity with Afghanistan makes things more difficult for Tajikistan that faced a civil war during 1992 to 1995 when Afghan Taliban supported Islamists inside Tajikistan to install Islamic rule. This attempt of capturing Tajikistan is still on the agenda of Afghan Taliban and newly emerged Daiesh. Russia provides security to Tajikistan by injecting money constantly for border security force development and by providing a Russian brigade presence in Tajikistan. Since Pakistan is getting closer to Russia, relations with Pakistan has become one of the priorities of Tajikistan foreign policy.

Tajikistan looks towards Pakistan as a market of 200 million (20 crore) people and believes that Pakistan, Afghanistan and Tajikistan Trilateral Transit Trade Agreement (PATTTTA) can be very useful for Tajikistan and CPEC system can connect Tajikistan eastward and as far as Gwadar Port. Though India opposes this policy of Tajikistan during Modi visit but Tajikistan did not buy Indian idea of connecting it with India through long way of India—Sea—Iran—Turkmenistan—Uzbekistan and then Tajikistan. Modi promoted same idea during his meeting with Turkmenistan President Gurbanguly Berdymukhammedov on July 13 before he came to Dushanbe. He proposed Turkmenistan to become part of International North South Transport Corridor.

Pakistan and Tajikistan have signed more than 40 bilateral agreements since early 1990s but nothing concrete came out of these agreements and both countries practically failed to get fruits of their relationships due to almost no land and air connections. Afghanistan has always been a troubled land between Pakistan and Central Asia and no good news ever comes from Afghanistan. In past, Pakistan failed to negotiate any special agreement during Taliban rule in Afghanistan about getting access to Wakhan belt because Pakistan had been supporting Pushtun Afghan Taliban while Wakhan had been under the control of non-Pushtun Uzbek and Tajik leadership. Over-sold idea of Pakistan of CPEC as game changer in region also looks impractical due to Afghan civil war where more characters like Daiesh are cropping up to make things worse.

Recent visit of Tajik President is very important for Tajikistan because if Pakistan fails to give some tangible support to Tajikistan then it can seriously think about International North South Transport Corridor (INSTC), which is a ship, rail, and road route for moving freight between India, Russia, Iran, Europe and Central Asia. INSTC looks practical and viable comparing to CPEC link to Central Asia through Afghanistan.

Central Asia is rapidly losing hopes for a normal future of Kabul due to grave law and order situation in Afghanistan. Tajikistan and Uzbekistan have expressed their concerns about Afghan situation during last CIS Summit in Kazakhstan. While India and China are also withdrawing from a number of international contracts with Kabul during last six months and stopped any further investment in Afghanistan.

The outcome of visit of President Emomali Rahmon will be very important for CPEC as well as future relations of Pakistan with this central Asias state. Pakistan can loose this friend forever if things do not move ahead and both countries keep standing in papers —-MoUs and agreements.