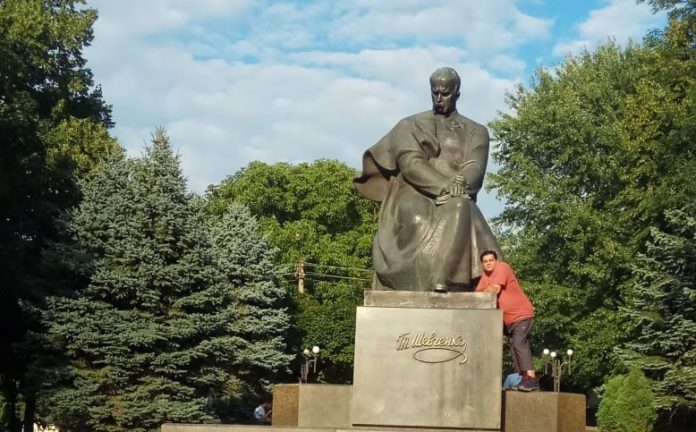 Yesterday 9 March was his birthday as he was born as a slave in 1814 on March 9 (according to New Style dates).

He lived half of his short life either in imprisonment or in forced departure from his motherland but he never bowed down to Imperialism. He can tell cost of freedom to those who debate what is important of being a Free Nation.

I wish those who have interest in intellectual Freedom Fighting must read my already published article—-   A Conversation with Ivan Franko published on July 28, 2019.

CLICK HERE TO READ MY ARTICLE TRAVEL FOR CAUSE: A CONVERSATION WITH IVAN FRANKO

Hereunder I am reproducing a short version of my previously published article:

I met Ivan Franko in a garden of Ivano-Frankivsk Oblast – a land which was originally known as Stanislavshchyna or Stanislavivshchyna till November 9, 1962 and was renamed after the name of Ivan Franko. 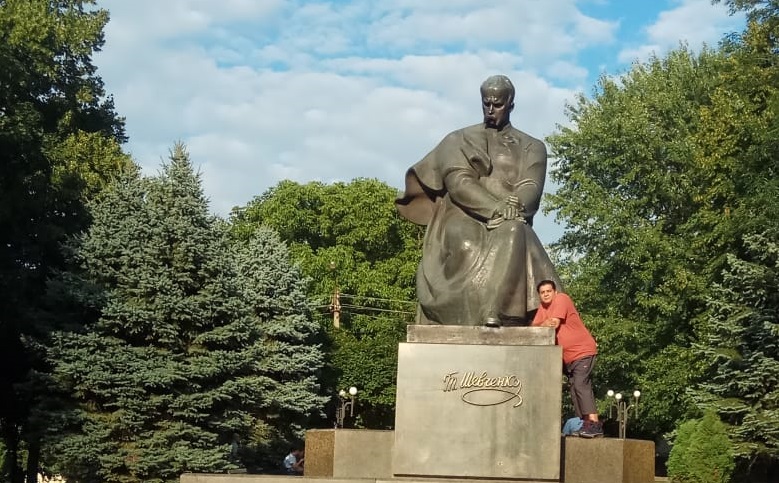 As a journalist my simple and expected question was that who inspired him for dedicating his whole life for the preservation of Ukrainian culture and language under the oppressive Austro-Hungarian Empire which purged everybody about separate identity of Ukraine, Ukrainians and Ukrainian language.

He gave me a simple answer – He said:

I was inspired by the smell of my soil and breeze of my land and I have baggage of those who gave their lives while protecting Ukrainian identity and one of main sources of my inspiration was work of Taras Hryhorovich Shevchenko.

He asked me did I know Taras Hryhorovich Shevchenko? My answer was in negative.

He smiled and said you (I) would never understand me (Franko) and would never enjoy my (Franko) writing unless your (I) read and know about Taras Shevchenko.

Before I could ask him to tell me more about Shevchenko, he took a pause and said let me tell you who was Shevchenko. He said:

Our land (Halychyna–Galicia modern Western Ukraine) was negotiated among Russia, Prussia and Austria over the first partition of Poland led in 1772 to Austria receiving parts of Halychyna. For Empires, we were like cucumbers or sheep, not humans. But we (people of Western Ukraine) were not ready to bow down to any imperialism. We had been subjugated, enslaved, sold and purged but we never lost our identity. Ottoman Empire used to transport us like animals and used to sell us in slave markets of Constantinople (Istanbul) but yet they failed to fetch away our language, culture and identity rather we transported our culture with Ottoman Empire through personalities like Anastasia, or Aleksandra Lisowska (Roxelana) whom you know as “Ḫurrem Sulṭān” (Wife of Suleiman the Magnificent of Ottoman Empire).

We are strong enough to survive oppression and every oppression made us more irrepressible.

Taras Hryhorovich Shevchenko (born in 1814) lived half of his life in exile and imprisonment but he never left sketching Ukrainian female figures and culture in his paintings and never stopped writing Ukrainian poetry and prose writing. All his life and creative work were dedicated to the people of Ukraine. The poet dreamed about the times when his country would be a free sovereign state, where the Ukrainian language, culture and history would be highly valued, and the people would be happy and free.

Shevchenko was a serf (a kind of slave or agricultural labourer bound by the feudal system), by birth but he had free thoughts and free soul, and he paid price of this freedom of his soul. His first collection of poems, entitled “Kobzar” (1840), expressed the historicism and the folkloristic interests of the Ukrainian Romantics, and his poetry soon moved away from nostalgia for Cossack life to a more sombre portrayal of Ukrainian history, particularly in the long poem “Haidamaks” (1841). In early 1847, Shevchenko started to work as a teacher of visual arts at the Kyiv University. There, he engaged himself in the activity of the clandestine St. Cyril and Methodius society. When the secret society was suppressed by the Russian authorities in 1847, Shevchenko was punished by exile and compulsory military service for writing the poems “Dream,” “Caucasus,” and “Epistle,” which satirized the oppression of Ukraine by Russia and prophesied a revolution.

Though forbidden to write or paint, Shevchenko secretly wrote a few lyrical poems during the first years of his exile. He had a revival of creativity after his release in 1857; his later poetry treats historical and moral issues, both Ukrainian and universal.

Shevchenko was allowed to return from exile, and in 1858, he eventually returned to Moscow, and then came to St. Petersburg. In 1859, he managed to come to Ukraine, yet he was refused the right to live in his homeland permanently, so he was forced to return to Petersburg. Having ruined his health during his 10-year long exile, Taras Shevchenko passed away in early 1861.

Ivan Franko was telling me about the life of Taras Shevchenko and my thoughts were melting with agonizing tone of his talk and I could feel the pain of those who sacrificed their lives for protecting their identity.

When Ivan Fanko paused his conversation, I immediately threw another question that did fire sacrificing lives for protecting Ukrainian language and culture continue after the death of people like Shevchenko and Fanko?

He saw in my eyes and said – NO – Ukrainian mother land had thousands of thousands nameless heroes who never bothered to sacrifice their lives for their mother land.

I asked myself could he cite me one who I could quote as a journalist?

Iqrar you must read the history of Ukraine before asking me such shallow questions. We have a long history of sacrifices and this history is unending and most of time undocumented.