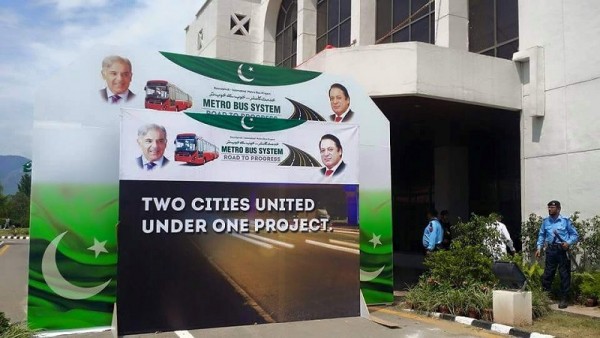 The government will subsidise fare to provide hassle free, comfortable and economical travelling facility to the residents of the twin cities. The inauguration ceremony was held at the Jinnah Convention Centre in Islamabad on Thursday afternoon. Pakistan has already Metro Bus Service in capital of Punjab province— Lahore since last three years while construction of third Metro Bus Service project has already begun in historic city of Multan.

The 23-kilometer signal free corridor of international standard has been constructed between Islamabad Secretariat to Saddar Rawalpindi in just 14 months with the total cost of Rs44.84 billion including an Interchange at Peshawar Morr at a cost of Rs5 billion.

The Rawalpindi portion of 8.6 kilometer road is overhead track.

There are 24 state-of-the-art bus stations on the route of the Metro Bus Service – 10 in Rawalpindi and 14 in the Federal Capital. These stations have modern facilities like computerized ticketing system, escalators, elevators for special persons and Wi-Fi.

In all, 68 buses have started operating on the route as of today and each bus has a capacity of 150 passengers. Around 150,000 commuters will benefit from this service daily. It may be mentioned that over 250,000 passengers use Lahore Metro Bus Service project daily.

Prime Minister Mian Nawaz Sharif believes in infrastructure development and has been working for better public transportation and road net work. During his last tenure as prime minister, he initiated Lahore-Islamabad Motorway that is the only international standard six lane road in South Asia.