Home мир Next round of talks between Iran, P5+1 in April: Iran 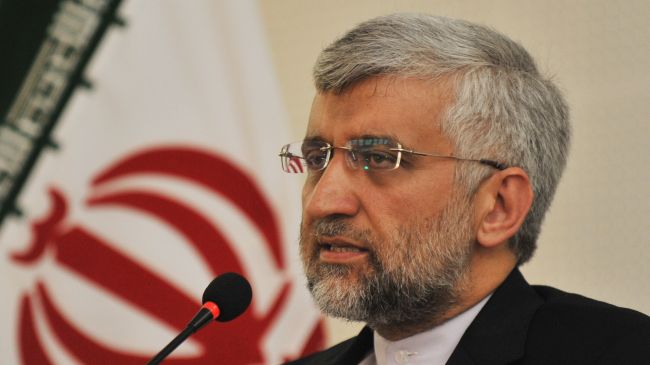 Almaty, Kazakhstan: Secretary of Iran’s Supreme National Security Council (SNSC) Saeed Jalili says the next round of talks between Tehran and the group of six major world powers will be held in Kazakhstan in April.
In a press conference following talks with the P5+1 (Britain, China, France, Russia, and the United States plus Germany) on Wednesday, Jalili said the next round of negotiations would be held on April 5-6 in Almaty.

Jalili added that expert-level talks between the two sides would be held in the Turkish city of Istanbul on March 18.

Iran and the P5+1 wrapped up their two-day negotiations earlier in the day in southeastern Kazakh city of Almaty.

“The P5+1’s response to the proposals that Iran presented in Moscow was more realistic comparing to what was said in the past,” Jalili added.

Jalili said in their response to Tehran’s proposals, the P5+1 had tried to get closer to Iran’s viewpoints in some issues which was a “positive” development.

When asked whether Iran would close down Fordo enrichment facility, Jalili said there was no reason to shut down the site as it was a legal facility and under the inspection of the International Atomic Energy Agency (IAEA).

The Iranian official added the P5+1 had not requested the closure of Fordo site during the two-day negotiations.

The United States, Israel and some of their allies have repeatedly accused Iran of pursuing non-civilian objectives in its nuclear energy program. Over the false allegation, Washington and the European Union have imposed several rounds of illegal unilateral sanctions against the Islamic Republic.

Iran refutes the allegation and argues that as a signatory to the Non-Proliferation Treaty and a member of the IAEA, it is entitled to develop nuclear technology for peaceful purposes.