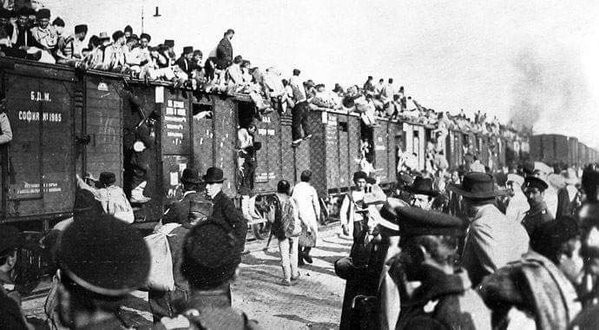 Several known (and several unknown and undocumented) operations for forced settlements and deportations are part of Soviet history under the Stalin era. Some of such actions include June deportation, Nazi-Soviet population, Operation North, Operation Osen, Operation Priboi and Operation Vistula etc.

In this article written by Dr. Olena Bordilovska, only forced deportation of Crimean Tatars is discussed.

The term Sürgün (Turkish word) is used to refer to the deportation. It means “expulsion”, as well as “exile”. In Russian language exile is referred to as “Изгнание”.

By extension, Sürgün refers to violent expulsion and prolonged exile. The deportation is the central event in the narratives that constitute individual memories and Crimean Tatars’ collective memory. Terms as genocide or destruction are found in numerous narratives, which are a singular demonstration of the pain suffered by Tatars. Indeed, the Tatar historical account considers the deportation as the last stage of a genocide planned since the annexation of Crimea in 1783 by the Russian Empire.

The National Mourning Day (May 18), also represents the birth of new solidarity for Tatars.

Crimea is a peninsula located on the Black Sea coast in the south of today’s Ukraine. In April 1944, after two and a half years of German occupation, the Soviet forces regained control of Crimea. The re-conquest was hardly completed when the Crimean Tatars were deported en masse on the false accusation of having collectively collaborated with the Nazis. This Muslim Turkic-speaking minority (Tatars) then represented 19.4% of the population of the peninsula.

In the early morning of Tuesday, May 18, 1944, soldiers of the People’s Commissariat of Internal Affairs (NKVD, the former KGB) entered Tatars’ houses by force and informed occupants about their immediate deportation because of acts of alleged “massive collaboration”—- An accusation of having collectively collaborated with the Nazis.

They were given only twenty to thirty minutes to gather some personal belongings. Without further delay, they were then sent to different railways stations, where they were loaded like cattle in their trains. Within the next three days, nearly 180,014 Crimean Tatars were deported from the peninsula. At the same moment, most of the Crimean Tatar men who were fighting in the ranks of the Red Army were demobilized and sent to far-flung labor camps in Siberia and in the Ural mountain region. The demobilized soldiers were released after Stalin’s death in 1953 and allowed to return to their families in their place of exile.

The day after, the State Committee for Defense, directed by Stalin, published a decree that ordered the mass deportation of Crimean Tatars.

The conditions of the transfer by train were particularly difficult and many of them, especially women, children, and old people could not bear and did not survive the last journey of their lives. The weakest ones were carried off by malnutrition, thirst, cold, overcrowding and diseases that spread rapidly in packed train carriages.

The Tatar deportees were called as “special settlers” when they reached their new settlements. They could not go as far as five kilometers away from their imposed place of residence, and once or twice a month they had to go to the local “Kommandatur” administered by the NKVD and had to sign an attendance register. Finally, they were forced to work in the collective State farms or factories and received meager wages.

Simultaneous to the deportation and the scattering of the Crimean Tatar people, the central Soviet Union launched a policy of “Detatarization” in the Crimean Peninsula.

Under this Detatarization policy, the main monuments and places which recalled the Tatar presence were destroyed; books about Crimean Tatars or written by Crimean Tatar authors were removed from the library shelves and some were burnt; names of natal places were changed and “Russianized”.

In the Republic of Uzbekistan alone, 16,052 of them died in 1944 and 13,183 in 1945. These figures do not include the people who passed away during the transfer by train. The deportation had a very heavy demographic impact on the Tatar population of Crimea.

In 1954, the Crimean Oblast was offered to Ukraine (because of economic reasons mostly). That internal decision, which did not have an immediate effect, proved to be decisive after the USSR disintegrated.

Stalin’s death in 1953 raised hopes amongst Crimean Tatar special settlers for some respites in hardships. However, their hope was quickly dashed and they were excluded from the processes of “Rehabilitation” led by Nikita Khrushchev in 1956 when most of the punished people regained their political rights and were authorized to return to their former homelands but Crimean Tatars, as well as Turk-Meskhetians, were not allowed any concession.

It is an unfortunate part of history that Tatars did not regain their civic rights as individuals and did not allow to back to Crimea. Moreover, this decision meant the negation of the collective existence of Crimean Tatars. They remained in their prolonged exile till the end of fall of the Soviet Union.

Since 1944, the deportation is at the center of the Crimean Tatar collective life. With the Crimean Tatars’ non-rehabilitation in 1956, a strong feeling of injustice and of incomprehension aroused. This acted as a catalyst for the birth of a nationalist movement.

National Movement focused on the return to Crimea and the restoration of the Crimean Tatars’ political rights. In spite of the repression that its most active members were victims of, and in spite of its divisions, the movement survived throughout the Soviet period.

Thereby, it contributed to the diffusion, amongst the scattered Crimean Tatar communities, of political identity of their own and a strong feeling of belonging based on a community of fate.

From 1988, during the Perestroika, thousands of Crimean Tatars began to return illegally to Crimea from places where they were forcibly sent by the USSR and this movement intensified before and after the collapse of the USSR.

Since the independence of Ukraine in1991; Crimean Tatars got a historical chance to return to their Motherland thus, 260,000 of them returned to the peninsula in 2002, out of the 500,000 estimated in the ex-USSR territory.

In 1991, Crimean Tatars established institutions of an Assembly (the Kurultaj) and its executive committee (the Mejlis). These institutions are Sole Negotiating partners and promoters of the Crimean Tatar identity in Crimea.

The eradication of the deportation’s consequences and the restoration of the collective rights considered as lost in 1944 remained one of the main concerns of the Crimean Tatar institutions, which acquired over the 1990s a strong political weight in the Crimean Peninsula.

For Tatars, there are no differences among Russian Imperialism, Soviet Era, and today’s Russian Federation

With the annexation of Crimea in 2014 by the Russian Federation, once again Crimean Tatars got a serious threat to their identity. Basic human rights are violated in numerous ways and the Mejlis has been banned by Russian authority.

It looks Crimean Tatars are again standing at the same place where they were thrown after Annexation of Crimea by the Russian Empire in 1783.

For Tatars, there are no differences among Russian Imperialism, Soviet Era, and today’s Russian Federation.