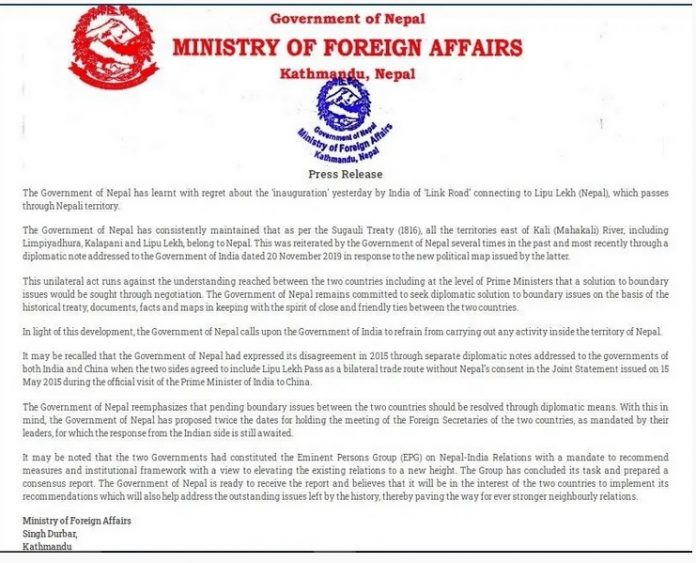 Monitoring Desk: After eroding UN resolutions on Indian Occupied Kashmir and unilaterally changing the status of disputed Jammu and Kashmir Valley last August 5, India by using its “New Political Map” published in November 2019 has included Nepalese territory of Kalapani into the Indian State of Uttarakhand.

The moved has created an outcry in Kathmandu and Foreign Ministry of Nepal has called Indian action illegal and against the reality of the region.

Issuing a press release, on Saturday evening, Ministry of Foreign Affairs (MoFA) of Nepal expressed its concern over the inauguration of the link road by India via Lipulekh region which falls on the Nepali territory.

Ministry of Foreign Affairs of Nepal stated that the Government of Nepal has (had) consistently maintained that as per Sugauli Treaty (1816), all the territories east of Kali (Mahakali) River, including Limpiyadhura, Kalapani and Lipu Lekh, belong to Nepal.

While Indian Ministry of External Affairs in a statement claimed that the recently inaugurated road section in Pithoragarh district in the Indian state of Uttarakhand lies completely within the territory of India and that the road follows the pre-existing route used by pilgrims of the Kailash Mansarovar Yatra. 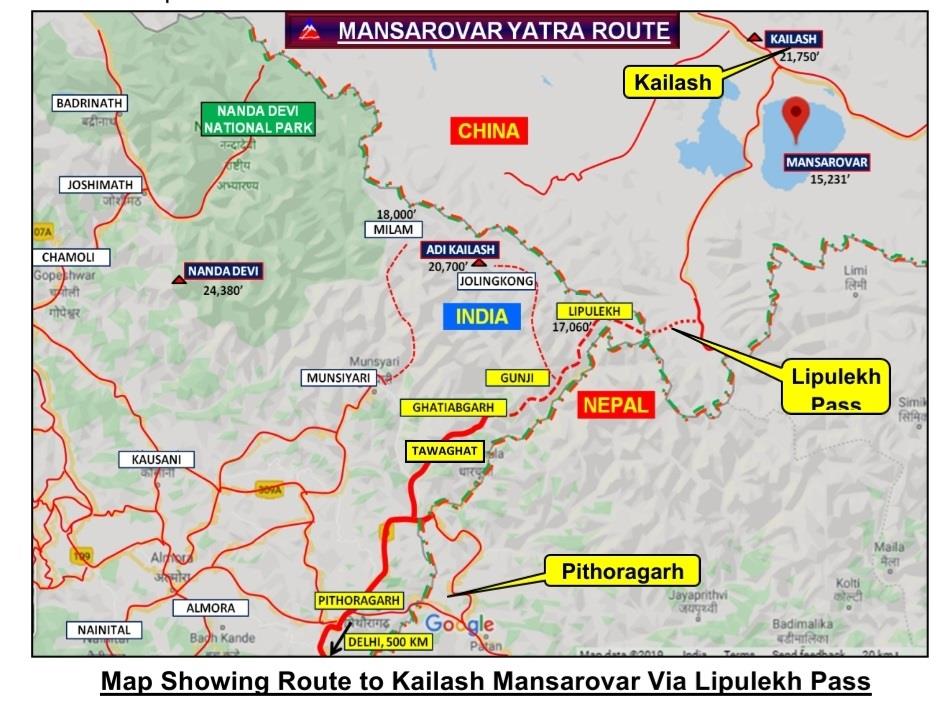 The Link Road, which connects Dharchula in the India state of Uttarakhand to the Lipu Lekh pass near the Line of Actual Control, passing through Nepalese disputed territory of Kalapani. Lipu Lekh pass is of strategic importance as it provides surveillance access to India to have an eye on Chinese movement.

The Kalapani region is under the administration of Nepal since the times of British India Raj but now India is claiming the region as a territory under New Political Map of 2019 which shows Nepali territory as part of Indian State of Uttarkhand.

Historically, Lipu Lekh and Kalapani region is part of Nepal under 1816 treaty between Britain and Nepal declaring Makhali river as the boundary. Now India is playing with an interpretation of the origin of Makhali river. India claims it to be originating at Kalapani and Nepal considers it beginning at Lipu Lekh pass.

Analysts say since last few months’ Indian hegemonic designs are now visibly challenging other countries in the region after bagging disputed Indian Occupied Kashmir after revoking Article 370 in occupied Kashmir on August 5, 2019, and since then Kashmiris are lockdown. Then India enacted the Citizen Rights Bill (CAA) which resulted in Hindu-Muslim riots in India.

India has been violating the ceasefire on Line of Control with Pakistan in Kashmir and is targeting civil population on this side of the LoC.

Regional experts believe that lukewarm reaction of United Nations and neighbouring countries over the reshaping of Indian Political and physical map since August 5, 2019 has encouraged India for eating up territories of other neighbours. Now India has taken the initiative of changing the status of Line of Actual Contact (LAC) with China by the trigging dispute with Nepal and eating Nepali territories to reach the mouth of LAC.

Nepal has asked India to refrain from carrying out any activity inside ‘its territory’, after expressing regret over New Delhi’s inauguration of the road in the disputed territory at a strategic three-way junction with Tibet and China and reaching Lipu Lekh Pass means a constant watch on Chinese territories.

In a statement signed by two chairs KP Sharma Oli and Pushpa Kamal Dahal, the Nepal Communist Party calls on Delhi to refrain from carrying out any activity ‘that will further complicate the matter’.

“[Our] serious attention has been drawn to the ‘inauguration’ by India of a link road to Lipulekh of Nepal via Nepali territory,” said the ruling party in a statement signed by chairs KP Sharma Oli and Pushpa Kamal Dahal.

Full text of the statement of Ministry of Foreign Affairs of Nepal is hereunder for ready reference:

“The Government of Nepal has learnt with regret about the ‘inauguration’ yesterday by India of ‘Link Road’ connecting to Lipulekh (Nepal), which passes through Nepali territory.

The Government of Nepal has consistently maintained that as per the Sugauli Treaty (1816), all the territories east of Kali (Mahakali) River, including Limpiyadhura, Kalapani and Lipu Lekh, belong to Nepal. This was reiterated by the Government of Nepal several times in the past and most recently through a diplomatic note addressed to the Government of India dated November 20, 2019, in response to the new political map issued by the latter.

This unilateral act runs against the understanding reached between the two countries, including at the level of the Prime Ministers, that a solution to boundary issues would be sought through negotiation, the Ministry said. It added that the government remains committed to seeking a diplomatic solution to boundary issues on the basis of the historical treaty, documents, facts and maps, in keeping with the spirit of close and friendly ties between the two countries.

The Ministry recalls that the Government of Nepal had expressed its disagreement in 2015 through separate diplomatic notes addressed to the governments of both India and China when the two sides agreed to include Lipulekh Pass as a bilateral trade route without Nepal’s consent in the joint statement issued on May 15, 2015, during the official visit of the Prime Minister of India to China.

Moreover, the Government of Nepal reemphasizes that pending boundary issues between the two countries should be resolved through diplomatic means. With this in mind, the government has proposed twice the dates for holding the meeting of foreign secretaries of the two countries, as mandated by their leaders, for which the response from the Indian side is still awaited.

The two governments had constituted the Eminent Persons Group (EPG) on Nepal-India Relations with a mandate to recommend measures and institutional framework with a view to elevating the existing relations to a new height, the Ministry noted. The Group has concluded its task and prepared a consensus report.

The Government of Nepal is ready to receive the report and believes that it will be in the interest of the two countries to implement its recommendations which will also help address the outstanding issues left by history, thereby paving the way for ever stronger neighbourly relations”.

It may be mentioned that Indian Armed military-men of the Indian Military Check-posts tried to grab grab Lipulekh Pass on June 9, 1952, in the northern frontier of Nepal but put away and sent back to India by the Government of Nepal on 20 April 1969 and since then this area has never been a part of any controversy between India and Nepal but now it has a become a flashpoint for future unrest in the region as China would never accept this sharp move of India in its bordering region for slicing Nepal— a buffer state between two-nuclear rivals of Indo-Sino war of 1962.