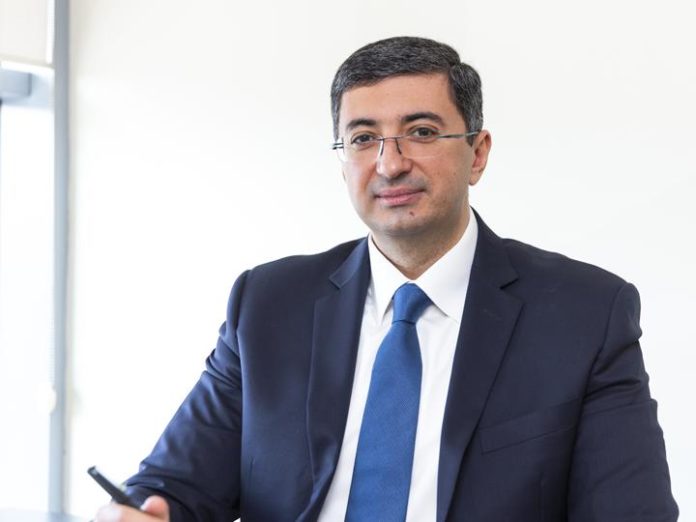 Global monetary reset is happening in front of our eyes, right now and right here. Yield on 30 year US treasury notes falling under 1%, oil price crashing 30% in a single day and world stock markets continue plunging.  Why this happening now and what are the reasons?  We shall break-down the modern monetary system of the world into pre and post 2008 global financial crisis periods in an attempt to understand the conditions that preceded the presently formed situation and then make forecasts.

What was worse, the underlying economy was losing connectivity with real economic growth, depended instead on debt monetization (financing of government debt/operations by central bank). Since 2007, the US debt-to-GDP ratio has increased from 63% to 107%, while Japan’s has reached 250% (please see Table 2). A debt-to-GDP ratio exceeding 100% indicates that an economy is entering a real danger zone with literally no means of reversing an inevitable economic depression or break-down. The US and Japan are among the present-day champions of this “game”, despite the fact that the US dollar and the Japanese yen are considered the top safe-haven currencies in the present monetary system.

Debt monetization and fiscal stimulus were two major trends following the global financial crisis of 2008. To finance economies’ budget deficits, central banks became the major buyers of government debt. The largest central banks quadrupled their balance sheets from 5.5 trillion USD to over 20 trillion USD (please refer to Table 3). The buying of government debt by central banks resulted in a surge of national debt throughout the world. Governments soon realized that servicing rapidly growing national debt was straining their budgets. They did not see any economic point in paying interest to their “own” central banks. As a result, pressure was put on central banks to cut interest rates; inflation was no longer a concern. Governments became so dependent on cheap money and continuous central bank stimulus programs that could not exist otherwise. Realizing the hopelessness of the situation, central banks had to succumb and accept the rules of a new game. As a result, in 2016, the European Central Bank and the Bank of Japan adopted interest rates of 0% and -0.1%, respectively. From the end of 2018 to March 2020, the Federal Reserve Bank of America cut its refinancing rate four times, bringing it from 2.25% to 1%. The People’s Bank of China has been the only stronghold, although there is no doubt that it will follow suit very soon. Overall, the adoption of 0% or negative rates has become a widely accepted approach with no intention to reverse it given how rapidly the world debt has been rising.

This raises the questions of what ever-growing global debt means for the current fiat money system (paper currency) and what the way out of this crisis might be. It is apparent that the global economy, as presently represented by 88 trillion USD worth of GDP, is not capable of producing enough value to repay the globally accumulated debt of 260 trillion USD. There is no escape from the current monetary trap created by the world’s largest central banks. In the history of mankind, no single fiat currency has eventually survived; every fiat currency has failed – the present global fiat money system will be no exception.

Paradoxical or not, the nations that created the architecture of the modern financial system have been piling up debt and destroying the value of their currencies, while smart nations have been accumulating physical gold reserves. Table 4 below lists the top 10 countries that hold the largest gold reserves. Since 2008, Russia and China together have nearly quadrupled their gold reserves, while India’s has increased its reserves by 76%. During the same period, Turkey, a key regional player and a gatekeeper between Europe and Asia, almost tripled its gold reserves and currently holds 385 tons of gold, despite not ranking in the top 10. 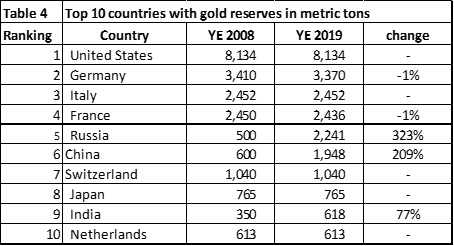 All fiat money, be it the US dollar, the Japanese yen or the EURO, is paper currency and is not backed by a commodity or any other tangible asset. From 2001 to 2011, the price of gold increased by almost 8 times, from 250 USD to over 1,900 USD per troy ounce in response to the rapidly growing US national debt, which more than doubled, reaching almost 13 trillion USD in 2011. Claims that gold is increasing in value because of trade tensions between the US and China, the coronavirus outbreak or various other reasons are common misconceptions. Gold is increasing because governments, supported by central banks’ currency debasement (devaluation) and their large-scale purchases of government debt, keep piling up debt. It is exactly for this reason that gold increased in value by 46.5% from 1,160 to nearly 1,700 USD per troy ounce over the last 1.5 years. In fact, it is not gold that is rising in value; it is the fiat money system that is losing its value compared to gold.

Global debt reaching a tipping point is a sign of coming economic crisis and eventual failure of present monetary system. When crisis hits, investors will realize that financial assets cannot protect them, as a result, they will turn into hard assets, namely gold and silver. However, COMEX Gold and Silver Futures market is so thin and small that physical delivery on mass scale will not be possible. As of March 6, 2020 total volume of gold paper contracts traded in the COMEX Gold Futures market exceeded actual volume of physical gold bullion by 7.5 times, 112 billion USD of paper gold market versus 15 billion USD actual gold (www.cmegroup.com).  Meanwhile as public is unaware of coming financial storm gold is just warming up. The trend of unstable gold prices and increased volatility is possible during the early stages of financial meltdown since investors liquidate everything they could in order to cash out or meet margin calls. However, gold eventually should exceed 2,000 USD per troy ounce mark and then continue to increase in value, ultimately doubling or even tripling from its present value possible in a very short period of time.

Overburdened by debt and endless monetary stimulus policies, the current financial system will inevitably fail. Major central banks are on the doorstep of implementing unprecedented quantitative easing programs over the years to come. Going forward the effect of monetary stimulus will continue to diminish making central banks absolutely helpless.  Economic depression will be accompanied by a severe rise in inflation, and stagflation will manifest as the major problem of the 3rd decade of the 21st century. Forthcoming crisis will not bypass the oil industry, which will continue shrinking in size marking the end of a petrodollar era. Nations that hoard physical gold reserves will benefit from the coming monetary reset. Gold is the only store of value and the ultimate safe haven, not the faulty monetary and fiat money system. In the third decade of the 21st century, gold will re-emerge as the backbone of the new financial and monetary system.

Source for the date taken from https://tradingeconomics.com, www.cmegroup.com