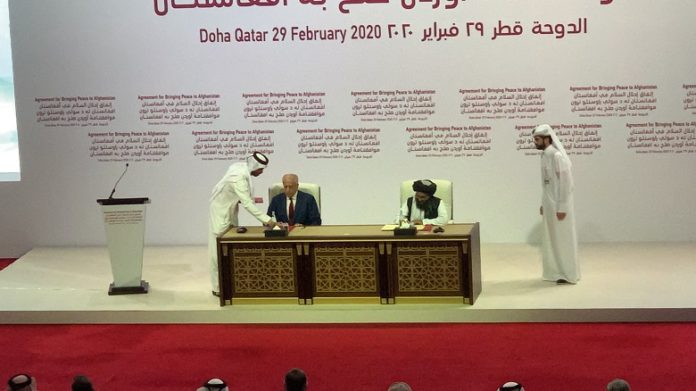 Kabul, Afghanistan: Two historical moment has been witnessed last week—- successful conclusion of Afghan Peace Deal between Taliban and United States and second is two Presidents of Afghanistan taking oath at same time but at different places. Every one of them believes that he is the legitimate President of Afghanistan.

Here I want to concentrated only on one historic development that is Peace Deal.

The agreement between the US and the Taliban has been signed in presence of all concerned actors on February 29, setting a timeline for withdrawal of all foreign troops from Afghanistan.

Taliban have committed to nonuse of Afghan soil against any country in the world and delinking itself from all terrorist organizations. Signing of the agreement leads to intra Afghan dialogue in few days. Under the circumstances, following thrust lines should be shared with all stake holders:-

For gaining fruits of Peace Deal, sensibility is needed here in Kabul and local leadership must shun their differences off for collective cause of peace in a country which has consumed two generations in fire of war.

Let us hope for the best for my country and pray for my young generation.