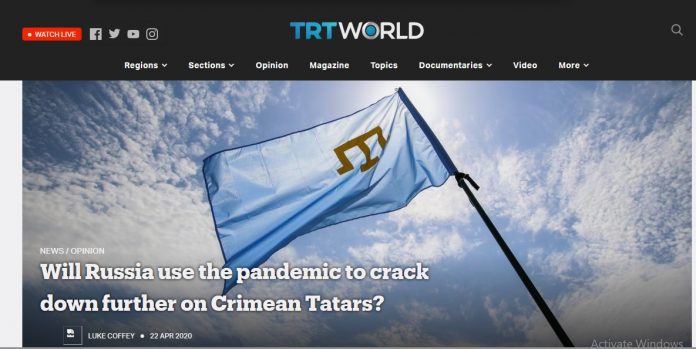 A special report of TRT World tempted me to think about strange similarities between Muslims living under illegal occupation of Russia in Crimea and illegitimate occupation of India in its administrative Kashmir. In both areas of the world—occupied people have no access to the out world and both are caged under censorship and military presence in streets and roads.

Similar to what is happening to other parts of the world, Russian occupied Crimea and Indian Kashmir are suffering from Covid-19 too but no one knows reality in outside world about how much occupied people are infected and in what condition they are living in.

Although official figures of the number of Kashmiris and Crimeans testing positive for Covid-19 can be measured in the tens, nobody knows the real picture on the ground. Russia restricts international access to the region. Situation is same in Indian Kashmir from where no credible informing coming out due to eight-months long communication blackout and physical lockdown since March 21, 2020. Foreign journalists and Human rights activists are denied access to Crimea so in Kashmir.

Freedoms of the press and media have been significantly curtailed since Russian takeover of Crimea in 2014 and when India changed of status of Kashmir since August 5, 2019. Only drips and drabs of information regarding the situation in Crimea and Kashmir have made its way out.

More than six years since Russia illegally annexed and occupied the Crimea Peninsula from Ukraine, the Muslim Tatar population remains under pressure, persecuted, and marginalised by Moscow.

According to TRT report:

Tatars are the original inhabitants of Crimea and observe Sunni Islam. Culturally and linguistically, they are Turkic people.

The Crimean Khanate, a vassal state of the Ottoman Empire, survived for 300 years until Russia’s Catherine the Great conquered Crimea in 1783. Since then the Tatars have experienced centuries of oppression by Russia.

During the aftermath of the Crimean war (1853-56), hundreds of thousands of Tatars left Crimea to avoid persecution by Russia after the conflict ended.

After the Bolshevik Revolution, thousands of Tatars perished as a result of the Moscow orchestrated Soviet famine of 1932. And even though many Tatars fought bravely for the Soviet Union during the Second World War (eight Tatars were awarded the Hero of the Soviet Union), in 1946 around 180,000 were forcibly deported to Uzbekistan under the orders of Joseph Stalin. Some estimates claim that as many as 45 percent perished en route to Central Asia.

With Russian authorities implementing new restrictions to fight Covid-19, there is a concern that the Tatars’ situation will become more precarious.

Few doubt the genuine need for schools to close or massed gatherings being prevented in Crimea in the wake of the virus. This has been standard practice all over the world. But looking at Russia’s track record of human rights abuses in Crimea, there are legitimate concerns that Moscow will use these new measures to combat the virus to crackdown on the Tatars even more.

Since Russia took over Crimea, the Tatars have been persecuted and targeted because of their culture and their faith.

Russia has severely cracked down on education of the Tatar language. Lessons are allowed to be taught only one day a week (on Saturday), for example. Moscow has closed down the Mejlis of the Crimean Tatars. Other Buildings associated with the Tatars are routinely vandalised.

Many mosques across Crimea have had CCTV cameras installed and are monitored by Russian security services. Some prominent Tatar leaders have been barred from re-entering Crimea. Situation is similar in Indian Kashmir where Muslims are not allowed to go to mosques since August 5, 2019. Unfortunate to say that perhaps most shocking of all is the fact that the international community is virtually silent on their plight.

Turkey is one of rear Muslim countries those raise the issues of the Tatars and Kashmiris on the international stage. The world needs someone who can shake so-called “Peace Brokers” for providing justice to Crimea and Kashmir.