ISLAMABAD: Pakistan’s federal Cabinet on Wednesday gave its approval to Trade Policy for the next three years with a proposed cumulative export target of $95 billion, Dispatch News Desk (DND) reported.

The cabinet meeting held in Islamabad today under the chair of Prime Minister Raja Pervez Ashraf. During the meeting, the federal cabinet also expressed the resolve to complete Pakistan-Iran gas pipeline project, saying that the country would not any pressure to abandon the project.

Under the new Trade policy, the cabinet earmarked Rs60 billion for export development projects while there was also a proposal to constitute a trade committee under the chairmanship of trade minister.

In addition, Rs200 million was earmarked with the approval of the cabinet for the next three years for the pharmaceutical industry. The meeting also discussed a proposal to give 2 percent rebate to exporters to compensate for the rise in tariffs of gas and electricity. 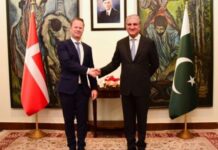