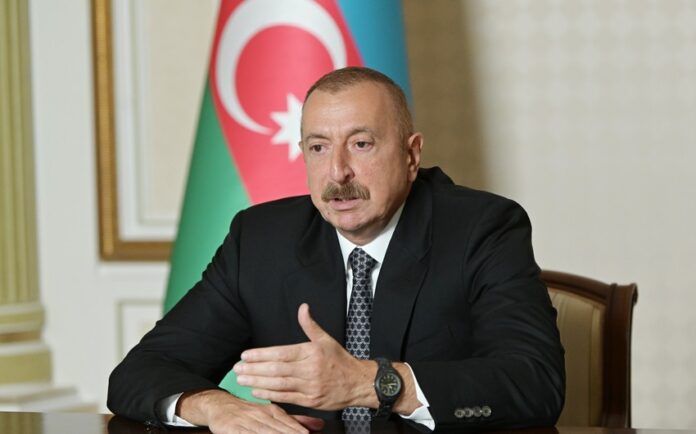 Azerbaijan is celebrating its 29th Independence Day today when its Armed Forces have liberated over 50 places from the illegal occupation of Armenia.

Fuzuli, Jabrayil, Hadrut Khojavend, Tartar districts, and many more important and historic areas are now freed from the decades-long illegal and brutal occupation of Armenian forces. The victory of Azerbaijan in a war that started in last week of September is written on the wall.

Today’s Independence Day is also a kind of Liberation Day for those who had been living in occupied lands.

The leadership of President Ilham Aliyev has placed Azerbaijan in the map of most successful countries if we talk about the throbbing economy, cultural harmony, infrastructure developments, education, health and other human development sectors.

Now Azerbaijan in the battlefield has shown the world that this nation under the dynamic leadership of President Ilham Aliyev is writing a new chapter of history by ruthlessly defeating its enemy who had been eating out Azeri lands for decades.

“Fuzuli city was liberated from the occupiers. Fuzuli is ours! Karabakh is Azerbaijan! I cordially congratulate all the people of Azerbaijan on this occasion,” said President of the Republic of Azerbaijan Ilham Aliyev as he addressed the nation.

At the end of the 20th century, Azerbaijani people raised the banner of independence with the fall of the Soviet Union. It was the second brilliant triumph in the political history of the Azerbaijani people during the last century.

In May 1992, the parliament approved the national anthem of Azerbaijan, and later the national flag as well as the coat-of-arms depicting an eight-pointed star with flames.

Since October 18, 1991, Azerbaijan has been a sovereign state and people celebrate this day as a holiday.

In war times, speeches and messages of President Ilham Aliyev are playing a pivotal role to boost the morale of the nation and Azeri Army finds their Commander-in-Chief among them in uniform who has shown exemplary personality as always.

Wishing Allah’s mercy to all our martyrs and healing to our wounded compatriots, the head of state said: “This once again shows the fascist nature of the Armenian leadership. This is not the first time our cities have come under fire. Armenia fires on Tartar, Aghdam, Goranboy, Aghjabadi and other cities practically every day. As a result of this fire, our citizens have been killed and wounded, more than 2,000 houses have been destroyed or seriously damaged. However, these cowardly actions cannot break the will of the Azerbaijani people.

Armenian leadership is committing a war crime. “Shooting at civilians, including firing missiles, is a war crime, and they must and will bear responsibility for this crime. We are giving their answer on the battlefield. We are avenging and will continue to avenge the deaths of innocent civilians on the battlefield. We have never fought or will ever wage a war against the civilian population. We are not Armenians. We have our own way, we have our own cause, and all the Azerbaijani people are united around this cause. All the Azerbaijani people are showing solidarity and patriotism,” the Azerbaijani President said.

“We have destroyed the military-technical potential of Armenia. Where do so many weapons come from in Armenia? Armenia is a bankrupt country. The country’s foreign debt is 60-70 percent of GDP. How much does this equipment cost? The number of vehicles destroyed so far is at least $ 2 billion. But their technique remains—both in the occupied and Armenian territory. The question is – Who is arming them? They criticized us that we are armed, we are buying weapons, which can aggravate the situation and turn the case in an unacceptable direction. But the question is when Armenia is armed? But where do so many weapons and equipment come from in this poor country? Today, guns and equipment are being smuggled to them. We want answers to these questions,” asked President Ilham Aliyev.

Questions raised by President Ilham Aliyev are very important and need answers from the world powers who are shy to check who is weaponizing aggressor Armenia.